“Don't go along to get along.” —Governor Jesse Ventura 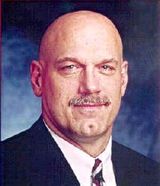 Former Governor Jesse Ventura (real name: James George Janos) is not a Christian. He believes in evolution and publicly boasts of sharing comedian George Carlin's views on God and religion.

Yet, Jesse Ventura is a man's man kind of guy, rugged, tough, decisive on the issues and a patriot. Mr. Ventura is a friend of liberty and freedom, losing popularity with many people who are asleep in these trying times. The Bible calls these “perilous times” in 2nd Timothy 3:1. The wickedness in America in 2012 is unprecedented in American history. When a nation starts recognizing sexual unions in marriage between lesbians and homosexuals, the nation is GONE!!!

How can anyone sincerely sing, GOD BLESS AMERICA in lieu of the 53,000,000 thus far murdered babies (human beings every one)? How can God continue to bless this evil culture of death and sodomy? Don't kid yourself, judgment day is upon us. As I type our economy is imploding. Our schools are indoctrination centers of atheism, humanism and Communism. Our local police departments now operate like the Gestapo or Hitler's fascist thugs. Everyone's a suspect until proven innocent. As of 2012 over 7,100,000 Americans are incarcerated, many for non-violent drug offences, unpaid fines or bogus infringements of the new nanny-state.

Jesse Ventura would make a great U.S. President I think. He'd clean house, that's for sure! The establishment will never allow someone like Dr. Ron Paul or Governor Jesse Ventura to take control of the White House. The American people are totally brainwashed by the newsmedia. It is sad, but true, that Americans don't think for themselves. This makes us vulnerable, which is why the NDAA was passed without any resistance from the public. UNBELIEVABLE!

NDAA gives the government the fascist Nazi-like power to make anyone they deem a troublemaker disappear, without right to legal representation nor trial. It is sad. Only 40 of the 535 members of congress opposed the NDAA. President Barack Obama signed the NDAA into law on December 31, 2011 (knowingly that the American people were all lulled on that day). It was during a Christmas weekend that the treasonous Federal Reserve Act of 1913 was passed (while most of congress was absent). Woodrow Wilson was a traitor of traitors to his country as U.S. President. Would to God that we had a President who cared about doing the right thing at all costs.

I admire men like Jesse Ventura. I don't support his atheist views and I hope and pray that one day he'll receive the truth of the gospel. Mr. Ventura would be an apostle Paul. Albeit, I like the guy and stand with him against the corruption, tyranny and evil which has overtaken our nation. As Jesse Ventura says, “Don't go along to get along!” That's why I love Pastor Jack Hyles (1926-2001) so much. Listen to this awesome sermon by Dr. Hyles titled, I'D Rather Study History Than Prophecy. Mankind is doomed to always repeating the past. If we'd study the past, ourselves and the mistakes of those who have gone before us, it would help us immensely more than searching for who the Antichrist will be.

America is blessed to have strong men like Jesse Ventura who are willing to lose popularity, risk their lives and rock-the-boat to stand for what is right. Anyone can be a patriot when it's popular to do so, but it's not easy being a true patriot when one's countrymen have been poisoned in their minds to think that submission to tyranny is patriotism.

“Dissension is the highest form of patriotism.” —Governor Jesse Ventura