Proverb 8:13, “The fear of the LORD is to hate evil: pride, and arrogancy, and the evil way, and the froward mouth, do I hate.” 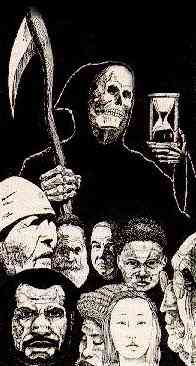 The Bible says that the fear of the LORD is to hate evil. How many people do you know in America who hate evil? Sadly, most Americans commit evil, let alone hating it. America is absolutely saturated with evil of every sort.

We are an evil nation—We are being brought to judgment!

It is not surprising that God hates pride and arrogancy, for they are the root cause of many other evils.

There is nothing more evil in America than the manure-spreading newsmedia. They have a froward mouth, destroying their neighbor. Proverb 11:9, “An hypocrite with his mouth destroyeth his neighbour: but through knowledge shall the just be delivered.” More people have been destroyed by the newsmedia than by anything else in America. They are arrogant, sinfully proud and greedy for money. It's all about making money.

The Scriptures teach us to be humble, and part of being humble is refraining from condemning others...

James 4:10-12, “Humble yourselves in the sight of the Lord, and He shall lift you up. Speak not evil one of another, brethren. He that speaketh evil of his brother, and judgeth his brother, speaketh evil of the Law, and judgeth the Law: but if thou judge the Law, thou art not a doer of the Law, but a judge. There is one Lawgiver, Who is able to save and to destroy: who art thou that judgest another?”

From children to the elderly, America has become a nation of self-righteous slanderers. The Bible says to be humble. Yes, we are supposed to expose those who publicly parade wickedness and attempt to publicly justify sinful agendas; but that is very different from condemning and slandering people for their personal faults and sins. Those who are sinfully proud and arrogant enjoy gossiping, slandering and destroying other people; but God tells us as Christians, who love the Lord Jesus, not to slander people. If we have nothing good to say, it's best to say nothing.

Proverb 6:16-19 tells us that God HATES several things: a proud look, a lying tongue, hands that shed innocent blood, a heart that deviseth wicked imaginations, feet that are quick to run to mischief, a false witness that speaketh lies, and he that causeth discord amongst brethren. Notice that God hates those “things”; not the people, but the sinful things they do. We see all of these evil things happening today in America.

Much discord is sown on the internet. The internet has become evil, broadcasting more gossip and slander about people than any other source in the history of mankind. It is a shame that many soulwinning preachers are being attacked by fools on the internet. Anyone can say anything about anybody. It is a sore evil. Many good people are being attacked, having their words cut/paste to mean something they did not intend. Though a righteous man do a thousand good deeds unnoticed, if he makes even one mistake it will be spread all across the internet at lightning speed.

The world is filled with malicious, hateful and envious people, whose only purpose in life is to speak evil things (i.e., a froward mouth) and destroy others. They are setting themselves up for Judgment Day. James 4:11-12, “Speak not evil one of another, brethren. He that speaketh evil of his brother, and judgeth his brother, speaketh evil of the law, and judgeth the law: but if thou judge the law, thou art not a doer of the law, but a judge. There is one lawgiver, who is able to save and to destroy: who art thou that judgest another?” God is the only Lawgiver and Judge. Some evil people take it upon themselves to be judge, jury and executioner. This is woeful evil.

It is only by their sinful pride and arrogancy that people condemn others. Instead of building for God, they are destroying for Satan. John 10:10 says Satan comes for the sole intent to kill, steal and destroy.

The “evil way” which God hates includes the abortion industry, the homosexual agenda, SIN CITY Las Vegas, Salem's sinful boast of being “The City of Witches,” the teaching of the falsehood of Evolution in public schools, divorce, and so many other forms of wickedness in society.

To commit sin is one thing, for we are all guilty sinners in God's eyes; but to publicly brag, parade and promote one's sins is another thing entirely. Americans are some of the most arrogant people in the world, thinking that they're better than other nations, doing as we please. Freedom gives people the right to be wrong, not do wrong.

2nd Chronicles 7:14-15, “If My people, which are called by My name, shall HUMBLE THEMSELVES, and pray, and seek My face, and turn from their wicked ways; then will I hear from Heaven, and will forgive their sin, and will heal their land. Now Mine eyes shall be open, and Mine ears attent unto the prayer that is made in this place.”

What a wonderful promise from God. If we'll just humble ourselves, pray, seek God's face, and turn from our wicked ways, then God will forgive and heal our nation.

Carefully notice in 2nd Chronicles 7:14-15 that humbling one's self is the first step to receive God's blessings. A humble man prays, realizing his need for Divine power. The biggest problem in America today is that people aren't humble anymore. Instead of being taught humility, children are taught through heathen music and vile TV shows to be selfish, self-centered and self-righteous. The first step to greatness is humility.

The sure way to test yourself, whether or not you are humble, is to ask yourself how much do you talk negative about people? It's been said that great minds talk about ideas, good minds talk about things, and weak minds talk about people. That is very true. I challenge you to lose yourself in serving God—soulwinning, contending for the Christian faith, taking a Biblical stand for God, helping the poor, visiting the unwanted in prison, helping the fatherless and widows, praying for our nations leaders, and visiting the forgotten in nursing homes, et cetera. The happiest people are those who spend their lives building something for God; and the most miserable people are those who selfishly revel in the failures of others.